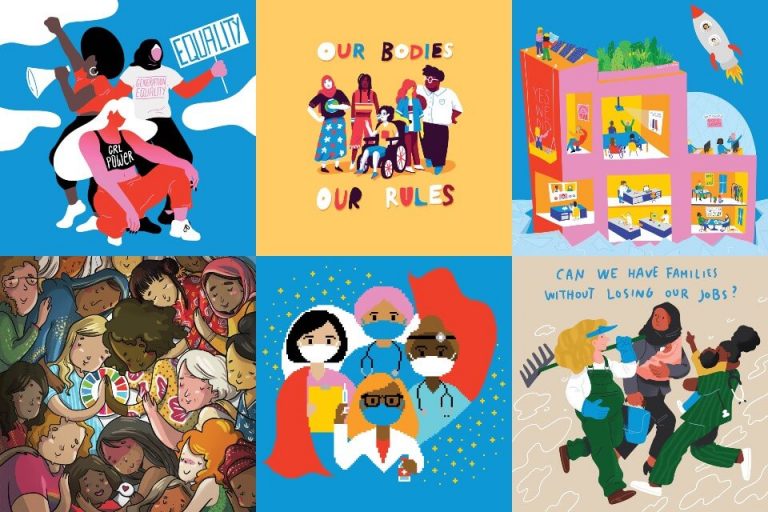 By: Originally published on un-women.medium.com

We all have the potential to create meaningful change in the world around us. Whether by educating family and friends, speaking up on social media, challenging stereotypes through creative expression or otherwise, we can each promote gender equality and #ActForEqual every single day.

In the run up to the 2021 Generation Equality Forum — a landmark gathering for gender equality convened by UN Women and co-hosted by the governments of Mexico and France in partnership with civil society and youth — we asked artists globally to visualize what gender equality means to them. We received more than 1000 inspirational submissions from creative advocates all over the world, each with its own vision of a gender equal future. Below, get inspired by some of our top picks and learn why these artists joined us to #ActForEqual.

Like many farmers in Kiambu County, which borders Kenya’s capital Nairobi, Teresia Njoki was struggling to grow a maize crop that could afford her a comfortable life. Yet, for years she was forced to contend with small harvests, often losing most of her output after harvest due to poor handling skills.

Things, however, changed for her in 2019 when she was introduced to better farming practices, inputs and technologies by a village-based advisor (VBA) in Ikihu, the administrative ward she comes from. The VBAs are lead farmers who are recruited and trained by the Alliance for a Green Revolution in Africa (AGRA) to offer extension advice to peers. AGRA identifies and trains the VBAs in partnership with government extension agents.

“Before my VBA came, we had little harvests such that we could not even feed our children adequately. However, we now witness bigger harvests and our children are content. We are also getting surpluses to sell for money to do other things,” said Njoki, one of the farmers in her region who are now receiving up to 2,634 kilogram/hectare, from as low as 417 kilogram/hectare previously.

The VBA model was designed on the realization that in most regions, extension service provisions are either limited or nonexistent. As a result, the government extension agent-to-farmer ratio in most countries is in excess of 1:5,000, whereas a ratio of 1:500 is considered optimum.

2030 will be a landmark year in global development if the Sustainable Development Goals (SDGs) are successfully achieved. For gender equality in agri-food systems to come true by the end of this decade, we will need wide scale gender-transformative efforts based on rigorous evidence and high-quality science.

Presently, gender research suffers from a glaring lack of evidence, as has been apparent in many ineffective policies around the world. Only 1 in 10 of more than 100,000 research papers on ending hunger, reviewed by international research consortium Ceres 2030 last year, considered gender differences in outcomes.
The Multilateral Organisation Performance Assessment Network (MOPAN)’s 2019 assessment of CGIAR also recommended the integration of gender issues into the design and implementation of research and human rights policies.

CGIAR launched the GENDER Platform and the CGIAR 2030 Research and Innovation Strategy in 2020 and 2021, respectively, to work toward evidence-based design, targeting and implementation of gender policies by the 2030 deadline.